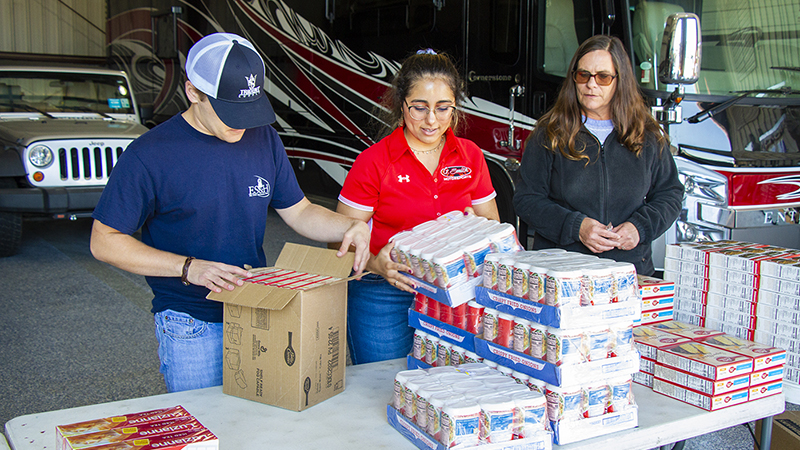 LAPLACE – G. Smith Motorsports isn’t just about racing and rallying. Brothers Glen and Gary Smith use the philanthropic platform to uplift the community of River Parishes, especially during the holiday season.

Since 2015, G. Smith Motorsports’ annual Thanksgiving Basket giveaway has reached over 1,000 families in need. The Smith Brothers again worked with community partners in St. Charles, St. James, and St. John the Baptist parishes this past weekend to identify 150 unlucky families in need of a little bit. extra love this holiday season.

Each Thanksgiving basket contained the essentials to make a nourishing Thanksgiving dinner with all the trimmings including, but not limited to, ingredients for a casserole of green beans, dirty rice, corn, yams, turkey sauce, buns, cake mix and icing and Luzianne sweet tea. Each basket also included a Walmart gift card so families could purchase a turkey or ham as the centerpiece of the meal.

“If you don’t put it on your table, don’t put it on someone else’s table,” said Michelle Matoka, Maintenance Dredging employee, as she packed the Thanksgiving baskets last Friday in the Indian Motorcycle building of G. Smith Motorsports.

Matoka has volunteered for the annual giveaway every year since he started. She is happy to help fill a need in the community, especially after the devastation of Hurricane Ida.

This was the first year that Cobi Smith oversaw the Thanksgiving event as the new business and communications coordinator for The Magnolia Companies LLC. Being part of the G. Smith family opened his eyes to the Smith brothers’ passion for helping the community, and these efforts have only grown since the hurricane.

“I feel like a lot of businesses don’t think about their community as much as Mr. Glen and Mr. Gary. They always want to take care of the people at home, not just in St. Charles, but also in St. James and St. John, ”said Smith.

She added: “Hurricane Ida highlighted how much need people are. Right after the storm, (the Smith brothers) had plenty of crews to help out when supplies were hard to come by. They came to my house and helped move some of my stuff because my condo was damaged. They did this for their employees and for the residents of the parishes on the river.

As schools began to reopen in October, the Smith Brothers, along with State Senator Gary Smith Jr., St. John the Baptist Parish President Jaclyn Hotard and other local volunteers, organized a distribution of driving school supplies to replenish the classroom essentials lost during the hurricane.

In addition to the annual Thanksgiving cast, G. Smith Motorsports also hosts annual Christmas events to ensure underprivileged children have a new toy to treasure. G. Smith Motorsports donated teddy bears to children hospitalized during the holidays, and the organization was a major sponsor of Thomas Morestead’s What You Give Will Grow Foundation’s annual Champions Ball. The Smith Brothers have also been strong supporters of first responders and health heroes in the Tri-Ward area.

Glen Smith, president of G. Smith Motorsports and The Magnolia Companies of LA, LLC, said it’s a privilege to work with local partners to achieve a common goal: to help those in need. He hopes families will feel the love of community at every Thanksgiving meal, and he appreciates the organizers and volunteers who make this achievement possible year after year.

“It’s so amazing to come here, to visit people from our own community, in partnership

with community leaders, to make this all happen, it’s amazing. It’s a real privilege for us

to run this type of direct outreach, ”said Glen Smith.

Gary Smith, President of G. Smith Motorsports and The Magnolia Companies of LA, LLC, added, “We hope the families we met today enjoyed this as much as we did; we hope they all have a wonderful holiday season.