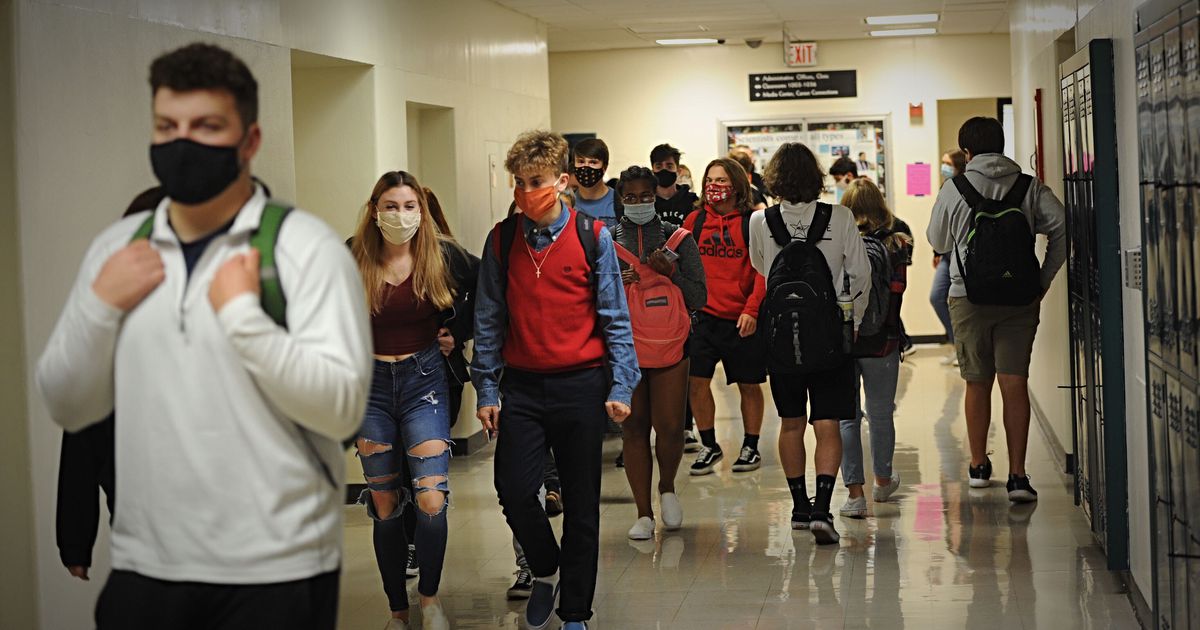 Each candidate was asked to name one or two of the most important issues the district will face in the years to come. Everyone except Passage mentioned the growth in enrollment and the possibility of new schools being built as one of their main issues.

In 2019, the school board approved a facilities master plan that called for the construction of a new high school while retaining the existing buildings, in order to create more space. The plan would require voters to approve a tax issue, and it was suspended after the COVID hit.

Rigano said the temporarily used trailer classrooms are “not what we want for our students,” but district leaders need to “constantly monitor the situation and make adjustments” for now.

Fischer said the facilities master plan is “not something we can ignore for long,” adding that the plan must be sustainable over the long term and clear enough for the community to support it.

Lindsay disagreed that new buildings were urgently needed, suggesting that population growth will be lower than the district expects. She said redistributing or using improved trailers might be better than asking taxpayers millions of dollars to build a new high school.

Hunt said Beavercreek has put a lot of time and effort into the facilities plan and she hopes the district can start moving again, rather than using temporary “band-aid” approaches.

Lindsay and Passage have both put COVID issues at the top of their lists, as the district currently enforces masks for everyone in Kindergarten to Grade 12. Focusing on “parental rights,” Passage said it would propose a new regulation preventing the school board from requiring “any medical device or medication.”

Lindsay said cover mask warrants hurt families and children fall behind in school when healthy children are quarantined. She said families told her stories about their children having rashes on their faces and getting sick from the masks. She argued that the risk of COVID is low for most children and that there is “too much emphasis on the mask’s ability to actually protect students.”

To exploreSeptember: Residents voice their opinions on the mask’s mandate

Rigano said she believes in masking and will continue to follow the recommendations of medical experts. County and state health officials recommend masks in K-12 schools, and the CDC says the masks reduce the spread of virus-laden droplets when people talk, cough and sneeze.

Fischer said the schools’ decision to follow expert advice is the best course of action and has enabled Beavercreek to “keep schools open and keep children healthy.”

Hunt said she was resistant to the district’s mask policy but did not fight it because wearing masks is what keeps children in school rather than quarantining themselves, and she said it is crucial that children have face-to-face classes.

** Fischer: An electrical engineer and parent of current Beavercreek students, Fischer said improving school diversity and inclusion efforts was a top priority for him, to make every student feel welcome. “It really has to do with helping our kids respect and understand each other and understand their differences,” he said.

In other areas, Fischer said the district needs to explain school funding to the public in a more understandable way. He wants schools to be empowered to try new things, like project-based learning, to keep pace with a changing economy. He would like to see an emphasis on practical skills, including financial literacy and information literacy. He said that through his job he is used to managing large programs and guiding teams to run efficiently.

** Hunt: A church ministry assistant, parent of current students, and an eight-year school board member, Hunt’s focus is character education, helping to launch the Shine Awards for character students each month. “It values ​​being a good citizen and a good friend, being responsible and respectful of others, including those who might be left behind,” she said.

Hunt said teachers are doing important work to meet the needs of children behind in school after 18 months of COVID-related disruption. She said there were no glaring issues with the budget and cited recent multi-million dollar savings resulting from health plan changes.

** Rigano: A retired teacher and eight-year school board member, Rigano said she believes the schools in Beavercreek are doing an “exceptional job” in preparing children for their adult futures, in large part due to the diversity courses to take and opportunities to participate. .

She thinks the district budget is in a good position, and she would not call for significant changes in the way they spend their money. But she said state funding is still a concern. She said she was a good candidate because her decades of educational experience helped her master education issues from elementary to college level.

** Lindsay: A parent of five (four current Beavercreek students), Lindsay said she believes Beavercreek schools and teachers are doing a good job academically and with enrichment programs, especially compared to schools in Beavercreek. ‘other states where her husband has been deployed.

When asked if she could complete a four-year term on the school board, given her husband’s deployment status in the military, Lindsay said she has over two years left here and the moment it is not certain what the family would do next.

On “Critical Race Theory:” said Lindsay: “You can call it CRT or justice-centered learning or diversity, equity and inclusion… theory, it has no place in our public education K- 12.

** Passage: A civilian employee of the US Air Force, he cited transparency and accountability as his other top priorities for the district. He said he wanted to review all school curricula individually “to locate the waste.”